Just a quick 1-2-flick that looks easy but should be practiced again and again and again: Place the ball on the shooting line and flick it with your attacker to a perfect angle so that the ball is shootable afterwards.

Move your attackers to the hatched area on the pitch. How can you do that? First flick: Get your playing figure with a soft touch behind the ball, they should stand closely together. Second flick: Repositioning, if necessary. FInal flick: Hit the ball in the perfect angle and with the right speed so that the figure runs right into the hatched area. [10 stages with two figures and balls.]

Place an attacker on your own and a ball on the opposite shooting line. Perform a straight longflick with your attacker so that it slightly touches the ball and moves it into the shooting area. Reposition attacker and ball with your second flick (if necessary!) or directly shoot a goal. [15 stages.]

Place five defenders along the center line. Stay behind your side of the table and flick any defenders backhanded to their own shooting-area line. [Three stages.] 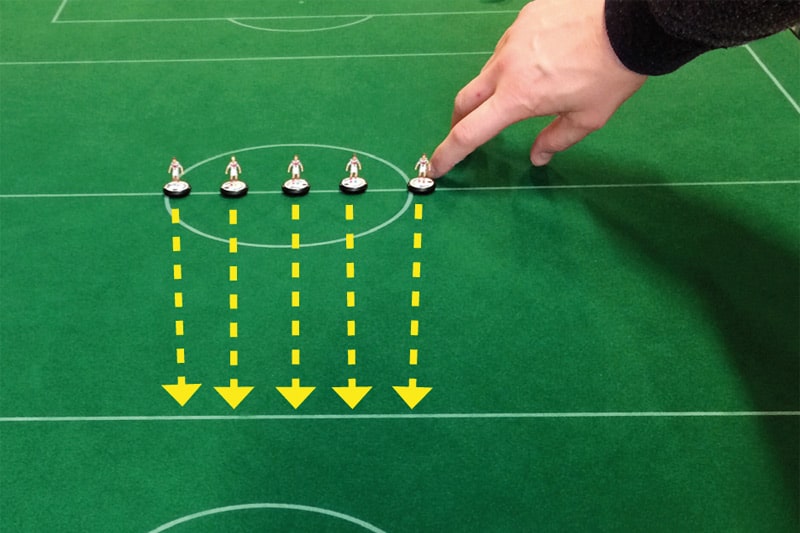 Place an attacker with ball on his own shooting line. Flick the ball forward and score a regular goal with a maximum of three ball contacts. [12 stages.] 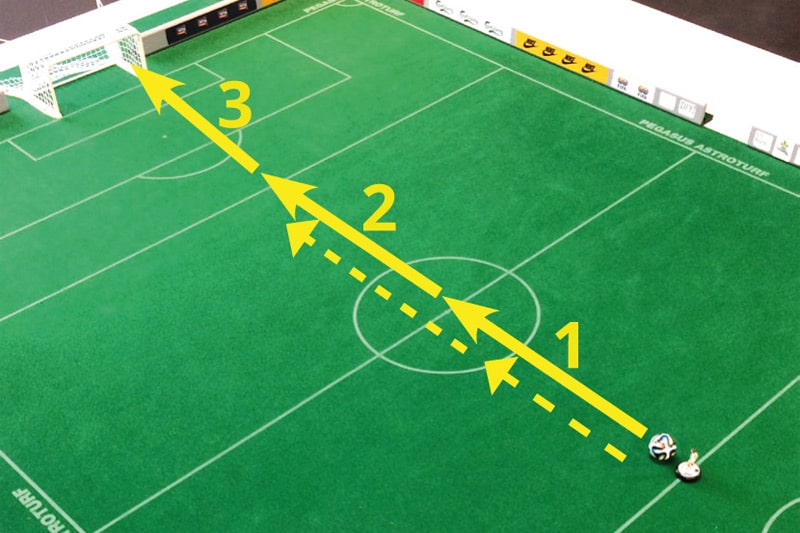 Put a ball 10 cm in front of the shooting line and an attacker between the ball and the center circle . Cut the ball with the attacker to change direction and score a goal with a maximum of three ball contacts. [10 stages.] 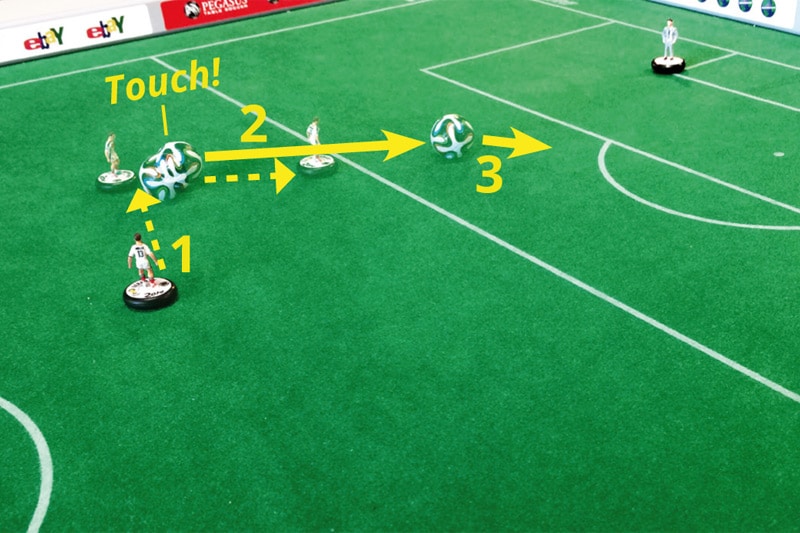 Put six balls into the shooting zone . Six attackers are placed at least ten centimeters behind. Now attempt to score a goal with each attacker. [Repeat stages with 20 and 30 cm distance from the ball.] 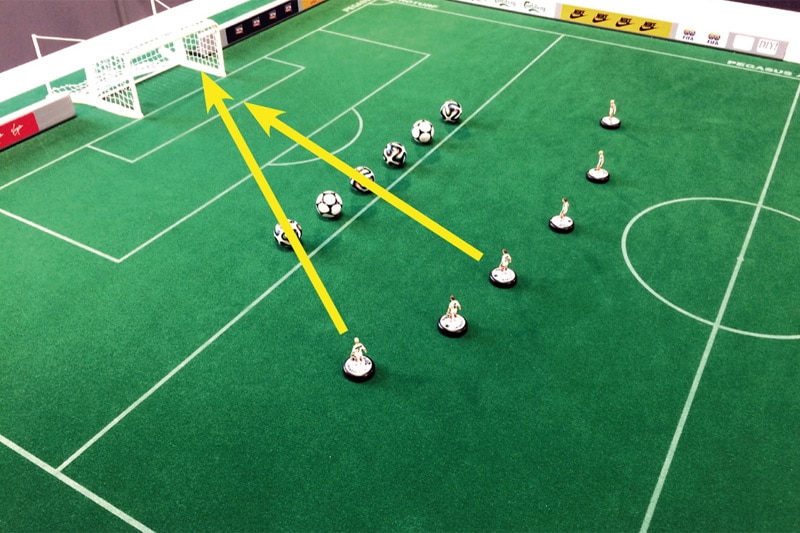 Place ten defenders along the center line. Flick any defender as precise as possible to the shooting line. Do not touch any of the remaining defenders on the pitch. [Three stages.] 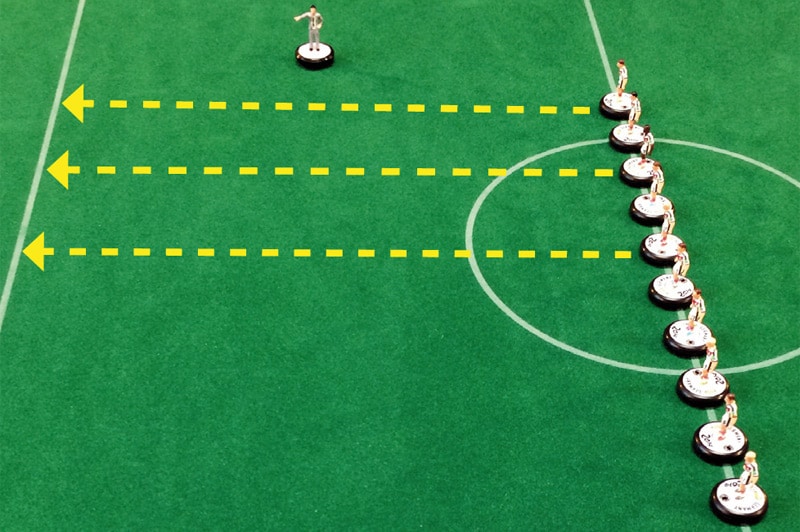 Put five balls on the center line and put five attackers along the shooting line. Flick the attackers so that they touch one of the balls easily. [Five stages.] 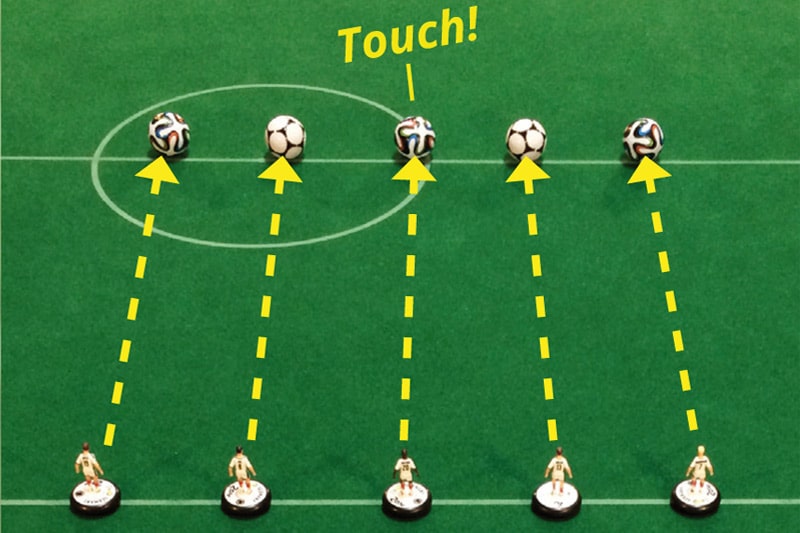